Rising from the remains of punk four-piece Third Party who sadly called it quits last year comes Concrete National. Instead of sticking with their signature thrash and scruffiness frontman Paul and guitarist Tony decided to switch their sound and form an Indie band, a genre they always felt inspired by.

There is a confidence in this track that immediately lets you know that despite being the tender age of eighteen, this isn’t their first band. The influences have changed, they went from sounding like Slaves to The Amazons.  Yet the swagger has remained.

The track also heralds back to classic rock and roll with an old school impressive guitar solo. The single as a whole is catchy without being annoying partly due to the thumping rhythm section. The production is extremely clean which is surprising considering the various layers and levels of this song.

On ‘Figure it Out’ we discover the melody and range of Paul’s voice. The backing vocals add a sense of cohesion and genre convention to their new track.

The song itself is about every musician’s favourite subject: love. Not all of us may have been in a steamy love affair. Yet everyone can relate to the second verse’s sentiments of: ‘I’m just trying the best I can.’

Catch them at The Bungalow in Paisley on the 23rd of April. You can get tickets here. 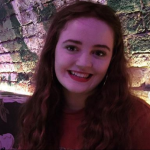