Only 24 hours following the release of their debut EP ‘Making Sense Of It All’, Edinburgh quartet Swim School blew the roof off a sold-out King Tuts getting inside all of our heads.

Happy Tears kicked not only the night off, but also their gigging career by playing unreleased track ‘Common Denominator’. Providing a set of catchy indie synth-pop tunes, it was hard to believe that Megan McNally and her band had never had a live audience before then – although their discography is currently limited, their talent prevails.

It wasn’t long before St. Clements dominated the stage dressed in all yellow engulfing the audience in their all too relatable latest single ‘“Great” Britain’ which reminisces about the state of the country in 2021. With a stage presence that was infectious, it was certainly not long before the crowd descended into chants and jumping as the band finished with bouncy single ‘Carwash Disco” leaving us wanting more. They were a literal ray of sunshine on the stage.

Bonnie Kemplay was the final instalment of support before Swim School took the stage, and her bedroom pop tunes did just the thing to prepare the crowd. A type of melancholy warmth rippled through King Tuts as she played through her 2020 single ‘Waiting For You’. While also treating listeners to a few unreleased tracks including ‘Checkers’ and ‘Winter’, before closing with latest successful single ‘Blushing’.

After opening acts as strong as that, the crowd knew they were in for a good night.
Swim School kicked their show off with hit ‘Sway’ and without hesitation the crowd was wild. Loud guitars paired with Alice Johnson’s ethereal vocals proved for a gig like no other, if you closed your eyes you’d mistake yourself for being in a sold-out stadium with thousands of fans – but I have no doubt that isn’t on the horizon for the Edinburgh rockers.

Making their way through debut EP ‘Making Sense Of It All’, the band also played crowd-pleasing single ‘Too Young To Know’ and unreleased track ‘More Than I Should Know’. Although their EP was barely a day old, the response was overwhelming, with the crowd in a trance we were treated to a punchy and unforgettable cover of Taylor Swift’s Love Story’ which erupted into loud call and response between the audience and Alice.

They rounded their set with an anticipated encore consisting of ‘See Red’ and ‘Outside’. As they left the stage for the final time and the lights came back it was easy to see that we are glad for gigs to be back, not to mention a fantastic night of female-fronted fantasies, bright futures and enchanting music. A taste of what’s to come. 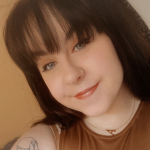