In the digital age, it’s hard to tell whether music is at it’s most unconfined stage of being or in it’s most imprisoned environment. On one hand everyone and their Maw’s Auntie can upload music to some streaming service, where it is free to be seen by millions of people, bringing unsigned artists opportunities they couldn’t have dreamed of, less than twenty years ago!

On the other hand, we are all drowning in a sea of endless content which can ironically limit your musical horizons rather than expand them. The reason I’m talking about this is because in this new oversaturated market full of artists who self regulate their own music for the sake of entertaining the invisible masses, the artists who make you think, “Who the fuck is THAT!”, come few and far between. Humour are a band that make me think, “Who the fuck is THAT!”.

From playing gigs at renowned Glasgow venues like Broadcast and St Luke’s as well as festivals such as Stag and Dagger and Tenement Trail, to being picked up by label ,’So Young Records’, ‘Humour’, have made a impressive debut onto the scene this year, having formed during lockdown a few years before. Now comes their first major offering: the ‘Pure Misery’ EP.

‘Humour’s’, sound is a delicious mix of post-punk but with the messy debauched indie clamour of, ‘The Cribs’, with a frontman who’s unnerving and deranged singing has to be heard to be believed. Laughter, absurd nonsensical yammering and oddly poetic but often abstract doggerel are scattered over loud devilish waves of shoegaze kissed guitar feedback, punchy bass lines and tribal drums. They sound like ‘Fontaines D.C’s’ offspring but with less restraint or inhibitions and will make you feel like your going mental or having the time of your life or most likely, both…

“I did that song cos I like it! Haaaaa! I wasn’t tryna say anything about myself or my taste!”

The band are not called, ‘Humour’, for no reason. There is a great deal of humour in these songs. If they aren’t taking the piss out of themselves – like in title track, ‘Pure Misery’, entertaining the absurdity of frontman Andres Christodoulidis, having to tell you something interesting or meaningful, just because he’s on stage with a microphone – they are taking the piss out of the world! For example, the arbitrary importance of material values is ridiculed in highlight track, ‘Jeans’, “…I took my car for an M.O.T and I left them my jeans and the size of my car! The size of my car! What’s wrong with my jeans?”. A dunno mate!

In a way though there is a deceptiveness to this strange jest. The band isn’t a piss take. Behind the initial shock value of their sound there is a lot of anger and sadness behind the songs which hits you when you least expect it, like in debut single, ‘Hey Mud!’, the line, “…tearing through the dark of half past two”, adds a snag of existential despair into a manic song about a horse.

Wrapping It All Up

These 6 tracks drag you through a myriad of extreme emotions where everything is felt in the fullest of capacity, from the weird to the grimmest of realities. ‘Humour’, have the cynical playfulness and shrewd severity of writers like William S. Burroughs and Charles Bukowski, along with the musical values of punk. Humour have proved themselves as the band to listen to when you feel like you’ve heard it all and prefer your joke with a jag!

Don’t just listen to me, wrap this around yer lugs and see for yourself! You won’t be disappointed… 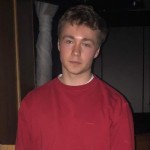