Since launching her solo career in 2019 Katherine Aly has been a regular on the gigging circuit and has enjoyed widespread airplay. Following on from 2019’s delicate ‘Sunny Days’, Aly is kicking off 2020 with a darker and lusher sound on ‘Misty Me’.

The instrumentation throughout is excellent – the macabre tingling sounds in the background of the chorus give the track a sinister and ominous atmosphere without being cringeworthy, while the warbling stereo bass in the second verse lends the track a cinematic width. The jittery 16-bit synths that close the song are wonderful in their creepiness; it’s not difficult to imagine them gracing a similarly-unsettling Bjork track or Disasterpiece score.

The most striking aspect of the track is how meticulously it has been produced; no sound or instrument overwhelms its comrades and Aly’s voice drifts carefully between the ethereal harps and mechanical bitcrushed kicks.

It’s this restraint that seems to prevent the song from building to a climax; each cadence feels like it’s on the verge of erupting into a malevolent carnivalesque crescendo, yet is inevitably followed by another verse or chorus. Prosaic lyrical themes of metaphorical clouds and what-relationships-could-have-been give the vocals a hackneyed feeling which is unrepresentative of the quality of the song as a whole.

‘Misty Me’ is an ominous and meticulously-produced track that explores interesting sonic territory – carried by a superb arrangement – which is let down by insipid lyrical themes, but not mortally. 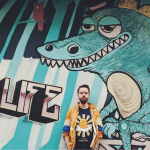