Black Wolf Cult is a name worth taking note of, it is the ambitious new solo project from former Tex & The Blackcats guitarist Lewis Michie, created after becoming disillusioned working in bands, instead he has positioned himself as a creative songwriter and instrumentalist passionately seeking an ever refined sound on a project that sees him play composer, lyricist, performer & producer his new material has him work alongside guest vocalists making for an exciting future ahead.

First single Don’t Leave My Bed Tonight features guest vocalist Holly Turner and sees Michie move as far away as possible from the hard rock sound that he’s known for as the track sits comfortably in the world of acoustic-folk, it’s clear that Black Wolf Cult serves as the artist’s creative outlet, a defiant statement of refusal to be limited by genres.

Anchored by Michie’s acoustic guitar work the song is a slow burning and introspective piece that calls to mind Fleetwood mac at times and displays the versatility of his songwriting, which is perfectly suited to vocalist Holly who’s sombre and emotive performance here is flawlessly delivered creating an atmospheric and reflective tune that is well produced, Overall this is a massive shift from Lewis’ earlier work that left me eager to see what else he has up his sleeve, and with his debut E.P. On the horizon you should definitely follow Black Wolf Cult closely. 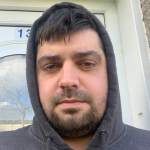