2019 has been a monumental year for the Scottish music scene. There have been so many unbelievable successes and also so many fresh new bands that have taken the scene by storm. This year has churned out some top-class singles by numerous bands from all over the country and below are just a few of the ones we have loved here at Discovery Music Scotland:

The Dunts – Hey Ya

2019 has been a monumental year for Glasgow band The Dunts, from touring all over the country to conquering TRNSMT festival. They have just recently released their cover of Outkast’s classic “Hey Ya”, since it has been in such high demand after they played it during their TRNSMT set and has already exceeded 18,000 plays on Spotify, without a doubt one of the best songs of the year if you ask me!

The Van T’s are a band that never disappoint, every tune they release has unbelievable power and energy and “Control” is no different. The track is upbeat, gripping and strong and unsurprisingly, it has been hugely popular within the Scottish scene since its release. I had the pleasure of seeing The Van T’s for the first time at the AGP Christmas Gig in Aberdeen a couple of weeks ago and I was not disappointed, absolutely unreal!

Fife band Shambolics re-released their tune “Chasing a Disaster” earlier this year and it has received a great response from the Scottish scene and beyond. Its psychedelic, happy rhythm is exactly what makes this tune song stand out and I think it was the perfect song for the band to release as their first single under Alan McGhee’s Creation23 records. Shambolics have had a great year, from constantly touring to raising money for local food banks, these boys never stop! I’m buzzing to see what 2020 brings for them and if 2019 is anything to go by, then I’m sure it will be a fantastic year for the band.

Rascalton – Employee of the Month

Rascalton released “Employee of the Month” back in May and I think it is one of the most original, relatable songs of the year. It is catchy, punchy and upbeat and its no surprise that the tune has done so well. In true Rascalton style, “Employee of the Month” is punky, it makes a statement and it sounds absolutely class live! I can’t wait to hear what the boys come up with next.

The Links have made a huge impact on the Scottish scene in such a short amount of time and their debut single “Last Line” shows exactly why. The track is filled with enthusiasm and it reminds me of some of the best 90s brit pop tunes, but with a unique twist. The tune is bursting with energy from start to finish and it is one that I have found myself listening to non-stop since its release. The Links are fresh on to the scene and the only way is up from here, I definitely think that 2020 is going to be a huge year for them.

The Snuts – All Your Friends

2019 has been a monumental year for The Snuts. They gained a few big support slots as well as selling out their UK and Ireland tour. They also played to a humungous crowd on the main stage at TRNSMT earlier this year. The band released “All Your Friends” back in May and it was the first of three singles released in 2019. It’s safe to say that the tune has been extremely successful, with its prominent bass and catchy lyrics. “All Your Friends” already has over 1,000,000 plays on Spotify and if that is anything to go by, then I’m sure 2020 will be another successful year for the band!

The Ninth Wave – This Broken Design

The Ninth Wave are a band that have put their own stamp on the Scottish music scene, they are incredibly unique, and their music showcases dark post punk with bursts of pop and psychedelic electronica melodies. Their single “This Broken Design” embodies the bands uniqueness in the most stylish way, the dark melodies and gripping vocals show exactly what The Ninth Wave are all about.

Between the Lines – Set on You

I reviewed this single when it was first released, and I just had to include it in our Top Tracks of 2019. The track is very unique and the instrumental focus throughout the tune is immense. As I said in my review, I think this single would sound amazing in a packed-out PJ Molloy’s, so get along to the band’s headline gig on the 4th January if you think the same!

The Roques – Fear Me

Dundee band The Roques have injected a completely unique and raw sound into the Scottish scene. Their single “Fear Me” embodies the bands sound perfectly, with grungy vocals and deep, punchy guitars. The tune almost has a dark sounding vibe to it which I love, and it sounds so powerful live too. “Fear Me” is the perfect insight into The Roques’ style as a band and I am so happy to include it in our Top Tracks of 2019.

Voodoos – Do it to Myself

“Do it to Myself” is an explosion of pure punk, a sound that the Glasgow scene is known so well for. Voodoos have played multiple gigs throughout the year and they show no sign of slowing down any time soon. The band have taken the Scottish scene by storm and their upbeat, punchy tunes are instantly recognisable. Voodoos have gained massive support from the Glasgow punk scene and I think 2020 will really be their year, they have already sold out the infamous King Tuts so its onwards and upwards from there!

The Medinas released “Daisy Chains” back in March and it is a total explosion of classic happy indie rock. The Dundee 4 piece have had an extremely successful year and have released another two singles after “Daisy Chains” which also carry the same amount of energy and the vocals in each tune really show the bands uniqueness perfectly. “Daisy Chains” is the perfect summer festival tune and I am sure we will be hearing it live a lot more in 2020.

Gallus released “Looking Like a Mess” back in January and it has gained over 70,000 plays on Spotify over the year. Gallus embody no holds barred punk rock and this tune is an eruption of complete energy, with punchy vocals and powerful guitars. They are another band that are heavily involved in the Glasgow punk scene, with regular Club Sabbath appearances and gigs at iconic Glasgow venues under their belt, Gallus are only just getting started.

Scarlett Randle has had immense success over the past couple of years and her latest single “HER” has heightened her popularity within the Scottish scene. It is extremely meaningful, and it displays emotion and rawness in its purest form. Her light, soothing vocals compliment the melody perfectly and this tune will only become more and more popular heading into 2020.

Fabric Bear are a band that I have been following for a good while now and I was extremely happy when they released “Pop Song” earlier this year. The tune is instantly recognisable as a Fabric Bear track due to the unique vocals and distinct indie sound that they execute so perfectly. Fabric Bear are on the rise and they will only continue to become more popular within the scene over the coming year!

Be Charlotte – Do Not Disturb

“Do Not Disturb” perfectly mixes meaningful lyrics with an upbeat pop melody, which in turn, has created an extremely catchy and relatable tune that Scottish music fans have loved over the past year. “Do Not Disturb” is an extremely catchy pop track, with bursts of synth beats and piano. Her vocals are so unique, and you can hear the Dundee accent peeking through just the perfect amount throughout the tune, which I love. This track has been extremely successful throughout 2019 and I think Be Charlotte is going to have an amazing year coming up!

There are so many more tunes that we have been obsessed with this year at Discovery, from the likes of Spyres, Baby Strange, Amy Lou and The Roly Mo so definitely check out these bands if you haven’t already! Here’s to a 2019 that has been filled with unbelievable talent and a to 2020 that will reveal so much more! 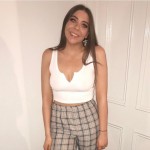