Eye-catching throwback track cements Megan Black as one to watch

Megan Black wants to change some things about the modern world. This has been obvious ever since she kicked off her music career in April 2019 – she refers to herself as a ‘hippy-dippy drag queen’ – and it’s illustrated even further on her new release, San Francisco.

Here, Black further consolidates her transition into 70s Americana-inspired rock, compared to the more stripped-back piano pop she started off with. This transition has undoubtedly proven fruitful, with the bluesy guitar work pairing well with Black’s powerful voice, with maybe the most accurate modern-day comparison being Taylor Momsen of The Pretty Reckless fame. Despite clearly finding her comfort zone in terms of genre, Black is far from afraid from trying new things, with this track incorporating a classic blues guitar solo and even some scat singing which, while not a completely successful inclusion, shows an experimental side that would no doubt serve her well going forward.

Lyrically, Black rails against the trappings of modern-day life, which she perceives as stifling originality (“I blame the revolution, for keeping us the same”). It is clear that Black pines for a return to the hippy lifestyle that had its heyday in the 1970s, and the whole throwback vibe of this track really visualises that era in the modern day.

In all, San Francisco invokes its title and the period it longs for a return to, helped by a strong soulful vocal performance from Black that cements her as someone for anyone with even a passing interest in the Scottish music scene to keep an eye on. 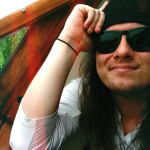