Well, it has certainly been a while since I sat down and wrote a gig review, nearly two years to be exact. From a culmination of the small issue of a global pandemic as well as personal things taking up most of my life, it has been hard to find the time. However, I am glad to say that, fingers crossed, it looks like we’re on the tail end of this crazy lockdown period as well as getting more free time personally I am back covering all things amazing about our local music scene. My thought was what a better way to get back into the swing of things than at one of my favourite local music venues, Conroy’s Basement in Dundee, to see a group of bands I had not had the pleasure of seeing before at the last night of Alan Carberry and the Freakshow Nightmare’s tour.

First up, and a late substitution, Nightbridge, or half of Nightbridge. From research, Nightbridge are usually a four-piece based within Glasgow made up of Richard Hyman on lead vocals, Peter Shepherd on Keyboard and vocals, Joe Standley on bass and vocals (Harmonica also going by their performance) and Brian Connor on Guitar. I’m guessing due to the last-minute call-up we unfortunately only got to see Peter and Joe as opposed to the whole band, however, they definitely did themselves proud. Having listened back to them via their Spotify releases they are very much a varied band made up of very talented individuals who have come together to create an interesting mash-up of styles. This in mind however, Nightbridge, or what I have seen of them so far, are what I would state as easy listening, tunes that you could put on while plodding about the house, additionally, their acoustic tunes give off a the camp-fire vibe as you’d imagine in movies. On the whole Nightbridge are a band for which I will be looking out for and hopefully seeing their entire ensemble next time to get a true sense of them as a whole.

Up next, and a brand-new experience for myself at a gig was Mark Richardson. Now the reason I say this was a new experience for me is that Mark is not part of a band or a solo artist in the conventional sense, Mark is a poet or spoken word artist if you will. Spoken word is something which I have literally zero experience with so apologies if anything I say comes across as ignorant or obvious but I promise I’ll try my best in conveying my personal opinion and experience so here goes. My first experience of live spoken word was certainly an enjoyable one, in a sense music and poetry are the same, both looking to evoke feeling within a listener as well as showing their personal feelings and experiences and Mark certainly did this. Many of Mark’s poems were drawn from personal experiences throughout his life, living and growing up in Dundee from one about the V+A being built and a poem from the eyes of a seagull in Dundee. The inclusion of spoken word within gigs is something that I had never considered before but Mark’s performance left me wondering why? Mark’s poems acted as a brilliant bridge between the music, bringing out laughter from the crowd as well as interacting with the audience. In a way spoken word is just one step away from the crowd interactions while many artists such as Lewis Capaldi have been heralded for, this is why I left knowing the inclusion of spoken word and poetry is a step forward within the traditional form of ‘gigging’.

Next up was a variation of a band which we are no stranger to here on Discovery Music, the 121s. Now going by the name many people within the local scene might be unsure of who they are. Now if I said they were fronted by local scene veteran Nick Shane many people would now know what to expect from their performance. However, the 1:21’s I feel bring something different than any of Nick’s previous endeavours. Of course, you still get what you expect from Nick, cracking catchy tunes with impressive guitar solos that would have any music-savvy person scrunching their nose up in admiration. However, the 121’s bring more depth to the music with the inclusion of catchy keyboard riffs and subtle drum beats at times they really do merge with the unique sound with we have come to expect from Nick. All of these elements are actually summed up and put on a show in their latest release ‘Wired to the Moon’, which actually sounds like the name of a poem Mark would have written. In all a solid performance by the 121s and actually the first time I’ve seen them play together, looking forward to future performances as I believe one is coming up very soon…

Last, but by certainly no means least the headliner Alan Carberry and the Freakshow Nightmares. Now I must admit prior to the gig I had not listened to one second of Alan or his band so had no idea what to expect from them. What I did know however, is that they brought an impressive amount of support be that friends or fans and it is clear to see why. Having had a chat and some banter with Alan his guitarist Kieran beforehand you could tell that they were just a bunch of pals who loved having a good time creating music and jamming out. They brought a party atmosphere to Conroy’s, which can be very difficult to at times, despite not knowing any of the tunes, being in there with everyone, having a good time to brilliant music, reminded me why I love the local scene so much, likeminded people just there to have a good time. As for the music, the impressive attendance was warranted, much like the rest of the night, they brought a unique merge of musical styles, a mix of jazzy guitar and bouncy drum beats made up a lot of their sound. To anyone that enjoys the local scene, I would liken them to the Midnight Alley’s, who consequently supported them in the Stirling leg of their tour.

In all, it was a very successful first gig back for me and 3 new bands for me to follow, in addition, it also opened me up to the world of spoken word and poetry, certainly not something before this gig I could have seen myself saying. I guess the moral of this review is to go out and do/see new things you never know you might just surprise yourself. 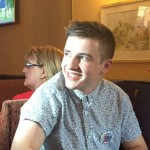