7 West Music show yet again that they’ve got an eye for Scotland’s best talent, with another great release. Rascalton have dropped their first single on the label, and it’s the perfect way to hit the ground running.

Sign of The Times is a track highlighting societies biggest issues, such as poverty, selfishness, and ignorance. It confronts those who bury their head in the sand, and refuse to acknowledge those in need, and points out the pressure the less fortune are under. An important message provided by one of Scotland’s leading acts. Rascalton have shown a natural growth with this song in terms of lyrics, performance, and production, and it’s clear to see why they enjoy so much success across the country.

The riff interweaves with the vocals to create a message that’s gripping and memorable, with a stripped back opening that’s as powerful as it is simple, before the clashing drums kick in to hammer it home accompanied by a deep bass line, repeating the first section again to start the second verse. The band know the message they want to deliver, and repeatedly reinforce it.

Rascalton are an important driving force in Scottish music, and with this release they show their deep understanding of the culture across the country, and stand alongside those without the platform to voice their struggles. Every performance and release from the band connects with their audience in a way that a many bands struggle to do, and with this release and it’s message they’ve provided an important opportunity for people to take these sentiments and share them across the board.

Sign of the Times will be available on Spotify and Apple Music from the 1st of May! 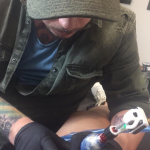