A brand-new boutique three-day camping festival is coming to the beautiful grounds of Scone Palace, Perth later this Summer. Otherlands Music and Arts Festival will take place from 19th – 21st August this year, this exciting new festival is organised by the founders of the iconic FLY. The festival has announced the first wave of artists for its first debut in the stunning Perth location and its one not to be missed!

The festival will feature six stages which organisers have said will take festival goers “on a journey into another world” which sounds so incredibly intriguing! One headline act announced is two-time Brit Award nominees second album “Isle’s” which was released last year. Bicep known for his euphoric track “Glue” will be sure to make for a dreamy soundtrack to your night in the idyllic Perthshire countryside.

Otherlands will also be partnering up with BBC Introducing who will have their own stage which will feature some of Scotland’s most exciting new artists.

Producer Tom Misch is also on the line-up along with Jamie XX, Honey Dijon, Folamour, Ricardo Villalobos, DJ Seinfeld and named as last year’s “Up Next UK Artists” by Apple Music, TSHA will be gracing the Palace with her upbeat feel-good vibes – with still so many more acts to be announced. So keep your eyes peeled!

Tom Ketley, Founder of Otherlands Music & Arts Festival, said: “We’re delighted to bring such an array of amazing artists to Scotland in what’s shaping up to be an unforgettable debut festival. There are so many unmissable acts still to be announced including a whole host of home-grown talent. To be able to do this at such a unique venue where Scotland’s Kings were once crowned is a true honour and we look forward to welcoming fans from around the world.’’

“Welcome to the Otherlands.

A place where we can all be free.
An escape of worldly music & culture deep in mother nature.
The eternal wonders of The Otherlands.“ 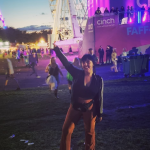