On the 23rd of December I attended B12 Entertainment’s ‘Melted @ The Albany’ to kick start the festivities. With four local bands set to take the stage and a sold out crowd, it was set to be a good night.

The Albany bar was crowded even before doors opened, packed with a crowd of all ages anticipating the night ahead. It was the first time I had been in the venue which had church pews as seating surrounding a compact standing section in front of the stage all of which aided to what would go on to be an electric atmosphere – I was a big fan. I was looking forward to seeing the bands, some of which I had seen before and loved, but also some I was seeing for the first time. Being from Inverclyde myself, I was a big fan of all of the bands and couldn’t wait to see them on the same line-up. As I watched people shuffle up the red carpeted stairs and spill into the venue, I found myself feeling grateful for B12 and their work. In a matter of years, they have taken the local music scene from almost non-existent to putting on events of the highest level to a sold out crowd. As the excellent host DJ for the night, Maria Woodside, brought her opening set to a close and the lights dimmed, the sense of excitement and cheers from the crowd filled the air.

Opening the show were The Insomniacs. They were a perfect opening as they brought immediate energy, crunchy guitar riffs and impressive solos from guitarist, Ethan.  A unique sound, mixing feel good indie and heavy rock, but one that works so well and was executed perfectly on the night. The set list reflected exactly this, covers such as Love Machine by Girls Aloud caught me by surprise but The Insomniacs put a fantastic spin on the feel good sing-along classic and incorporated it perfectly into the set.  Lead singer, Brendan showed great frontman ship engaged with crowd brilliantly and looked to be having the time of his life on stage. Their debut track, Out Tonight, kept the crowd going and provided an excellent ending. A fantastic set by The Insomniacs, I thoroughly look forward to catching them at another gig in 2023.

Second to grace the stage were Adam & The Regents. I had last caught them at a previous B12 production at SLAY! supporting the extremely talented Ben Walker so was very excited to catch them again. I love their unique blend of indie pop and 80s synth pop and always seem to find myself having a good time watching their sets. Taken from their debut EPs Rainy Days and All Alone they played fan favourites Never Alone, Fine by Me, and a personal favourite Dance With Me. A meritorious cover of Rule The World by legendary Tears for Fears was met with much excitement amongst the older crowd who were singing, dancing, and clapping along. Adam & The Regents really look at home on stage and make it all look so easy! Thoroughly enjoyed how they passed the same pair of sunglasses between each member changing at the end of each song, a subtle arrangement but something that really turns a set into a show. For fans of indie pop, Mac Demarco, or Dayglow – this band is for you!

Next up we had Black Dove, who were making their return to the local music scene post-covid and playing what was only their second gig of the year. A band I have listened to for a while so was very excited to finally see them live. They have a sound I associate as similar to Catfish and The Bottlemen, they blew the roof off The Albany. I thoroughly enjoyed the 2021 single, State of Mind and the mega track Fake ID totally encapsulating a night out as a 17 year old. Honourable mention to frontman Josh Cunningham, his vocals, guitar solos and all round performance was of the highest order. A band that had been tipped to do well pre-covid and without a doubt can still go on to big things. The lads hit the ground running much to the crowd’s enjoyment. A truly sensational set.

The final act of the night were Strange Dimensions who have taken the scene by storm in 2022. The floor was packed, the seats were packed, the crowd were noisy – I couldn’t wait for what was yet to come. For fans of electrifying guitar music, Strange Dimensions are absolutely for you. I enjoyed their debut track, The Dregs which lived up to my expectations but the live arrangement of Beauty In Crime was my highlight of the set. The crowd held on to every word that was sung, every chord played, and every beat hit. I thoroughly enjoyed the addition of the keyboardist to the band, it helped provided some depth to the tracks and complimented the exemplary guitar from lead guitarist, Liam Docherty. The crowd were emphatic with people on shoulders, mosh pits forming, and everyone covered in sweat or beer or even both. It was beautifully chaotic and ended the night on such a high.

A fantastic night of music showcasing some of the finest talents from Inverclyde. Special thanks to all at B12, Gareth and Zak – for all the work they do for the local scene. Massive shoutout also to the afore mentioned Maria Woodside who kept the energy high all night with her DJ set in between acts. I highly recommend all of the bands who all brought something a little different and made a fantastic line up. I urge any music fan, local or not, to get to a B12 production – they do not disappoint! 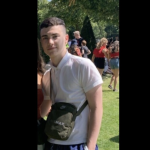