King Tuts Wah Wah Hut has become the place to be in the new year as 2023 marks the 12th edition of King Tuts New Year’s Revolution! With an authentic sound and rising stars in the making, the venue is taken over by total talent for the whole month of January. With four bands playing each night, you won’t struggle to find your next favourite.

To see what the buzz was all about, I headed down to the hut to add to my Spotify cycle and you bet I struck some gold! Pink Limit is a beating heart of rock, drawing major inspiration from Queens of The Stone Age and Royal Blood. They’re sleek, stylish and according to their bio, set on ‘world domination’. So, I wanted to take you all with me to catch up with Pink Limit. From what’s coming in 2023 to how they narrowly avoided a name clash with Canadians. Read on to find out more!

Mya: We are here with Pink Limit before they take to the stage for their first-ever King Tut’s Headliner! Thank you so much for joining us. Let’s get the ball rolling, who are Pink Limit?

Mya: What inspired your name?

Finlay: We used to be called Cola, but there’s a really popular band in Canada that took that so we had to change it. I just went on to my Spotify and looked at a list of song names that I liked then sent them over to Oscar. He went “They’re all rubbish, I hate them. But then, eventually, we got to the point where everybody’s second favourite was Pink Limit. So, after the Biffy Clyde song, we became Pink Limit.:

Oscar: It has grown on us but at that point in time we were all a bit like “hmm”.

Hamish: It was fine, we had nothing better.

Mya: I think you guys narrowly avoided some copyright issues when you changed it from Cola.

Angus: Or we missed a sponsorship!

Mya: Pink Limit recently released some merch, do you have any favourite pieces?

Michali: The hat! I don’t have it yet because I can’t afford it but when we can afford our own merch I am getting the hat.

Finlay: The t-shirts are cool, maybe someone will be wearing one tonight.

Mya: With only two tracks out so far, your Spotify has seen thousands of streams with Too Fast To Fall being both your most recent and most streamed track. How was this track received by fans?

Angus: Our most recent gig we played through in Edinburgh, there were so many people singing it back to us and we didn’t expect it because we were playing outside of where we’re based. We were expecting a quieter gig. It was quite a nice feeling.

Michali: That gig in Edinburgh was the first time I got to point the mic at the crowd and not worry about dead silence. Everyone was saying when they saw me do it they were like “Oh crap, no ones gonna sing.”

Mya: We all met at a Christmas party but it’s January now so this is not a Christmas question. Although, I did have a cracker of a question lined up. If you had a party, as a band, who would you invite? Anybody dead or alive?

Angus: I was going to say something a bit out there. If it’s a party, probably someone like George Best? That’d be good fun.

Oscar: I’d have to go with Ringo Starr because he’s a great drummer!

Hamish: I would’ve said Simon Neil as well. I’ll go for someone who’s passed and that would be Taylor Hawkins. I would love to meet him.

Michali: I would invite Huey Lewis of Huey Lewis and The News. I reckon that guy can party!

Finlay: We want to go down to England. Not played in England yet! We had three headliners last year. The main thing is that we want to record and get more out there. We’ve been a bit slow in that sense but we’ve got plenty songs ready to be released.

Angus: Just keep building and keep doing what we’re doing. The only way is up!

Hamish: I think the most important thing for us is getting the music better and better. That’s the number one thing, especially for me. 2023 might be a year we go on to do things we never thought we could or it might be a year that we only do somethings. So long as the music keeps getting better then that’s what matters really. We believe in ourselves to keep pushing and keep going.

Oscar: We feel we’ve got a really strong set and we’ve got some good songs at the moment.

Mya: Phoenix is my personal favourite.

Finlay: The number one thing for us is music and wherever we play, we’ll bring the same energy, give it 100%!

Michali: Yeah, we just want to play every show like we’re headlining a stadium tour.

Mya: Totally tear it up like rockstars, wreck the stage!

Oscar: Michali did that yesterday, he broke an amp.

Michali: I did, yeah.

Hamish: Shh, we don’t talk about that!

Mya: Pink Limit, thank you so much for joining me. Discovery hope you have a great night!

Well, there you have it, Pink Limit is throwing one hell of a party, both on stage and off of it too! Haven’t heard them yet? Find Pink Limit here: 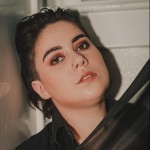