My pre-Christmas present is one I won’t forget after visiting Glasgow’s famous OVO Hydro venue, jam-packed with fellow rock fans who couldn’t wait to welcome old friends Alter Bridge after waiting 3 years since their last visit in 2019!

They did not disappoint in setting us up for a blast as the night kicked off with support from Mammoth WVH! Now for anyone who is new (like me) to these guys, then if you’re fans of Alter Bridge, Tremonti, and of course Van Halen, these guys are gonna be added to your playlists in no time! Mammoth WVH are also fellow American rockers, fronted by no other than Wolfgang Van Halen. It’s amazing to see iconic ‘Van Halen’ blood continue as Wolfgang is doing his Father, Eddie Van Halen, proud by producing new music, and modern rock songs while bringing that 80’s edge in his vocals keeping it true to the Van Halen family! They ended their set-list with a new favourite song of mine, which is one I’d personally recommend checking out if you’re new to these guys. This song will get you hyped, head nodding and is a total fight song! Enjoy!

As the crowd was already starting to get fired up we were anticipating the second support from the wild and wicked 4-piece heavy rock legends, Halestorm. Fronted by the badass Lizzy Hale, these guys gave us exactly what we needed to get more pumped and built an electric atmosphere before Alter Bridge. They featured some of their newest material which sounded phenomenal hearing Lizzy’s vocals fire up, particularly during ‘Wicked Ways’, ‘The Steeple’, and ‘Back From The Dead’. We were also treated to some older songs including ‘Familiar Taste of Poison’ which sent goosebumps hearing Lizzy’s vocals go from hitting the ballad tones to back to her impressive screaming in ‘Love Bites’ showing old and new fans the outstanding skills she has. Now talent is clearly running in her family as her brother Arejay Hale is Halestorm’s crazy, entertaining, and seriously skilled drummer who kept up the crowd’s energy with his memorable drum solo which featured the largest pair of drumsticks I’ve ever seen in my life! These guys did an incredible job at raising the energy levels, all in anticipation of finally embracing Alter Bridge!

Finally, the riffs kick in to get our heart racing from Tremonti as the set-list kicks off with ‘Silver Tongue’, one of the recent singles released from Alter Bridge’s new album, ‘Pawns & Kings’.
The 4 piece band gather echoes of cheers throughout this set that also featured other new music from their much long-awaited seventh album where we heard ‘Sin After Sin’, but the boys gave fans absolute treats as they played some of their older songs including ‘Shed My Skin’, ‘The Other Side’ and not forgetting the absolute fan favourites ‘Blackbird’ and ‘Metalingus’.

Hearing the crowd singing along through this set didn’t leave much room for front-man Myles Kennedy to invite the crowd in, as there were already roars of the many voices in the OVO Hydro pelting their hearts out! There was a moment the silence did kick in, however, when Kennedy and Tremonti took to the stage and surprised fans with an acoustic version of ‘In Loving Memory’. You could hear a pin drop as Tremonti played, but soon enough the crowd began singing along to this phenomenal, spine-tingling hit as fans shone their torches and created a wave of lights throughout as they joined in. From new to older material this gig flew in despite the band playing for 90 minutes, and it is no surprise the boys successfully did it again in creating emotions of hope, nostalgia, self-confidence, and love. This whole gig was one to remember from the support bands and of course no disappointment from Alter Bridge. Hopefully we welcome them back to Glasgow before another 3 years pass again! 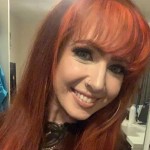